Advantages and Applications of Sapphire Windows

Sapphire Windows excel in windows made from other glass counterparts, especially in the aspects of superior surface hardness, durable qualities, and versatile functionalities. This article discusses t..

Both state and non-state parties face the imposing threats from the weaponization and illegal intrusion of UAS. The development of Counter-UAS, or C-UAS, in particular, Counter-Small UAS to detect, t..

This is a basic tutorial and guide to help you understand some important glossaries when you are selecting Optical Lenses and Camera Lenses...

This article is a thorough comparison of the differences and features of LWIR and MWIR thermal imaging cameras, comparing the emittance and thermal contrast in the two spectral regions, the impact of ..

Pockels Cells are important electro-optic device which exploit the pockels effect. Applying a constant or varying voltage (electric field) on Electro-Optic Crystals can cause the crystal birefringence to change linearly. A Pockels cell applied with a constant voltage is actually equivalent to a voltage-controlled wave plate. When a varying voltage is applied, the Pockels cell can change the phase delay of the crystal. The Pockels cell is the basic component of various optical devices, such as Q-switch and electro-optic modulator of the laser. They are vital components for e.g. Q-switching lasers.

Electro-optic Pockels cells are used in applications that require fast switching of the polarization direction of a beam of light. These uses include Q-switching of laser cavities, coupling light into and out from regenerative amplifiers, and, when used in conjunction with a pair of polarizers, light intensity modulation. 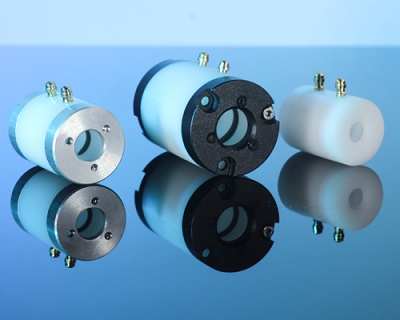 An electro-optical effect. Certain crystals will produce an additional birefringence under the action of an electric field. The change of refractive indices are  linearly proportional to the magnitude of the applied electric field. In 1893, the German physicist F. Pockels first studied this linear electro-optic effect, which gave it its name.
However, this effect only occurs in crystals that lack inversion symmetry, such as lithium niobate (LiNbO3), lithium tantalate (LiTaO3), barium borate (BBO), and gallium arsenide (GaAs), etc. Or  exist in other non-centrosymmetric media, such as electric field polarized polymers and glass.

3.Half-Wave Voltage
An important property of a Pockels cell is the half-wave voltage Uπ(also called Uλ/2 or Vλ/2). This is the voltage required for inducing a phase change of π, equivalent to a half an optical wavelength. In an amplitude modulator, the applied voltage has to be changed by that value in order to go from the operation point with minimum transmission to that with maximum transmission.

To be give a more direct demonstration, here is an equation for the half voltage of beta BBO crystals:

Typical Pockels cell have half-wave voltages of hundreds or even thousands of volts, so that a high-voltage amplifier is required to support large modulation depths. Relatively small half-wave voltages are possible for  crystal materials that are highly nonlinear（e.g.）LiNbO3, and for integrated optical modulators with a small electrode separation, the problem is that such devices have relative weak power handling capabilities.

We could deduce from the statements above the features of longitudinal and transverse devices:
Longitudinal device:

Here is a brief model of how a electro-optic Q switch work. We assume that the crystal has no birefringence without an applied electric field.